Waaaaay back in 2017, I experienced the most convincing phishing attack I’ve ever seen. I didn’t fall for it, but it was too close for comfort! I published my notes on Reddit and it got a lot of attention, and ended up in a few news articles.

Currently if the images or post are deleted, all the info will be gone forever, so I wanted to write it up permanently here. To summarise the phish: A fake app called “Google Docs” was created. If given access to your account, it emailed all your contacts asking for access to their accounts too.

Here’s the steps, as I experienced them & described them on the day:

To summarise, this spam email:

So, pretty scary. Whilst it’s easy to notice mini red flags when investigating the above images now knowing they’re a scam, when it’s a trusted contact inviting you to a document, it’s a lot more convincing.

I’d worked with this contact before on a shared Google doc, they’d been testing one of my games for me. As such, an invite to a document was not at all unusual, and there’s usually no risk in opening a Google Doc anyway.

For many people, myself included, my gmail account is pretty much the centre of my online life. I use it to login to all services, all password resets go there, it has years of payment records. Due to 2FA (which Google is very wisely beginning to force), my account always felt “safe”, but this phish would have bypassed it completely.

I consider myself pretty security-savvy online, but I can absolutely see myself falling for this phish if I was in a hurry or distracted.

The excellent YouTuber Atomic Shrimp speaks about scams quite often, and his recent video contained a diagram that prompted this post. He discusses the idea that when analysing an email’s trustworthiness, lots of little red flags can add up to make you suspicious. Using it, we can see our phishing scam… doesn’t have any of the flags his scam email did: 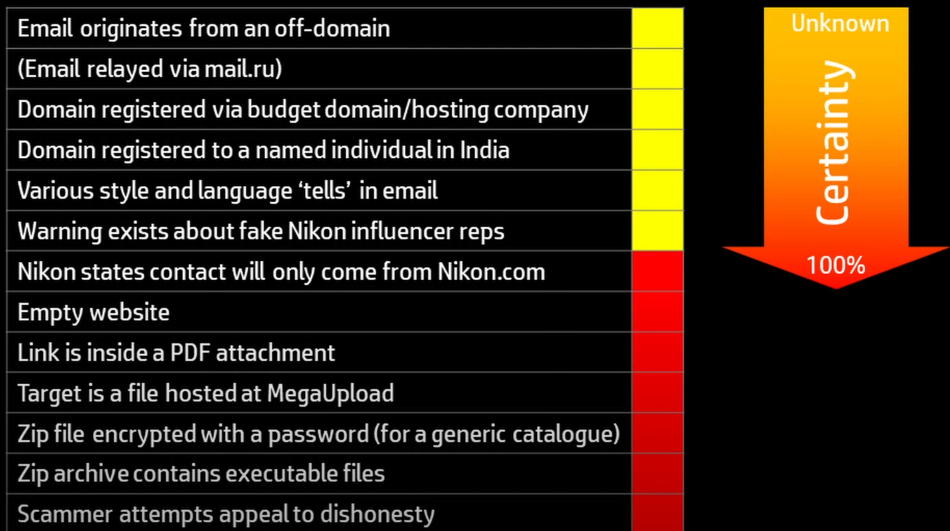 Screenshot from “Nikon Scam Targeting YouTubers - How To Recognise a Scam”.

In fact, it’s a genuine email from a trusted contact, with believable content, and a seemingly safe URL (no redirects, weird domains, etc). Atomic Shrimp has spoken many times about the risks in ending up clicking a malicious link, so the fact that this phishing scam nearly tricked me is humbling!

Here’s what I should have picked up on in my case, but didn’t, possibly because I was predisposed to trust the sender:

My post got a lot of attention, since the phishing spread itself extremely quickly (emailed to every contact), and hit at a time when the US was waking up, and the EU was still awake.

It got the attention of a few Googlers lurking on the subreddit, who raised it internally, and got the initial worm fixed within the hour. Lots of people also contributed ways for G Suite sysadmins to resolve the issue immediately.

The short term fix was disabling the malicious app that was spreading like wildfire, and long term fixes were being investigated:

We have taken action to protect users against an e-mail impersonating Google Docs & have disabled offending accounts. We’ve removed the fake pages [and] pushed updates through Safe Browsing, and our abuse team is working to prevent this kind of spoofing from happening again. We encourage users to report phishing e-mails in Gmail.

Some alleged source code of the worm was published on the day, and amazingly seems to do nothing malicious beyond spreading itself. Considering the attacker had access to every email in thousands of inboxes, it’s shocking that there were no negative impacts besides a bit of spam. Dodged a bullet!

Considering the to: hhhhhhhhh@mailinator.com, this worm gave the appearances of a half-finished attack that escaped quarantine. Perhaps a test run of the attack accidentally escaped to a real user, and then couldn’t be contained. However, it used multiple domains and a seemingly fake creator email (in the format first.last@gmail.com), so it’s a mystery who was behind it and why.

Considering the simplicity of the attack, it’s somewhat surprising that it hadn’t happened before. The attack’s server also slowed down massively from the intense load, so it’s possible the widespread success is what actually stopped the spread!